What You Never Knew About Poinsettias

If you have ever driven through the Kona Coffee Belt between Halloween and New Year’s, there is a good chance your eyes were drawn to large bushes or even full-grown trees with bright red leaves and you may have thought, what are those?  Those are Poinsettias.

This answer has surprised many tourists whose experience with the holiday flower has been little plants in gold tin foil covered pots that usually don’t make it past Valentine’s day.

The noble Poinsettia is a staple on coffee farms in Kona and a harbinger of the holiday season, let’s delve into this beautiful plant that grows wild on the side of roads all throughout West Hawaii. 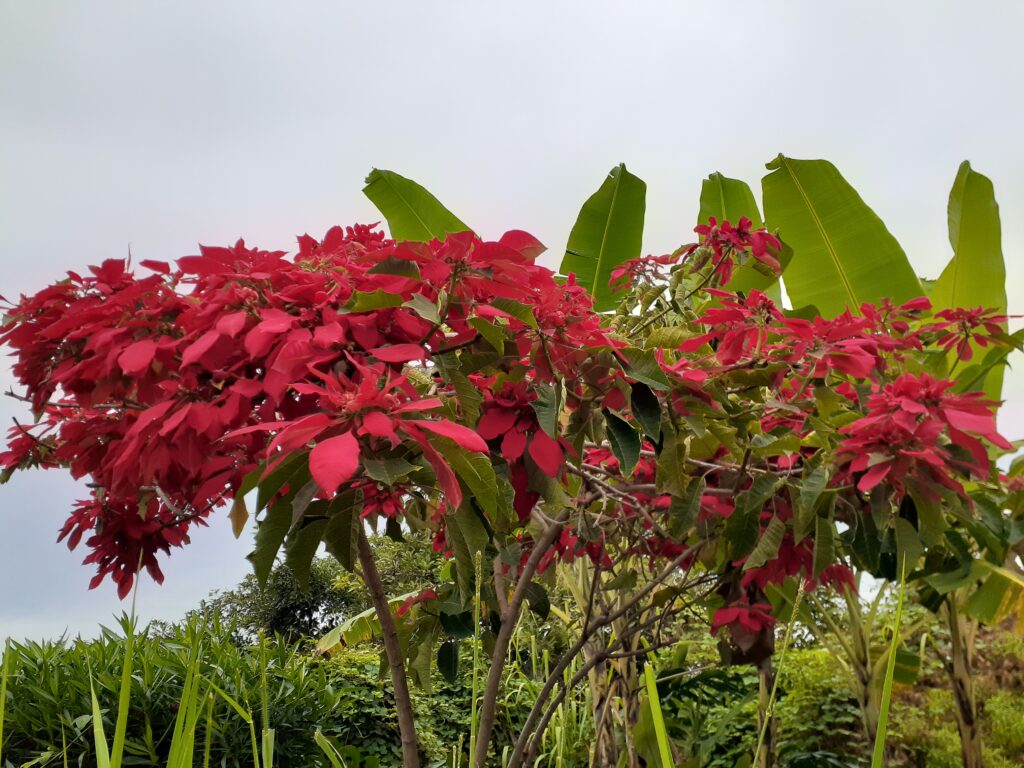 Indigenous to Central America, from Mexico to Guatemala, it was originally known as the Mexican Flame Flower or the Painted Leaf. The first US Minister to Mexico was also a physician and hobby botanist and began to send back this plant to his greenhouses in South Carolina. His name was Joel Robert Poinsett and as early as the mid-1830’s when it was officially classified as a new species, his name became attached to the flower.  It is well known that Poinsettias were cultivated by ancient Aztecs both as a dye and for its medicinal ability to reduce fever.

That’s Not a Flower

The gorgeous red leaves on the Poinsettia are indeed leaves and not flowers. They are technically known as “Bracts” which are colored leaves that hide a very small flower inside. Other examples are Dogwood and Bougainvillea.

The bracts of the Poinsettia turn bright red due to a process called photoperiodism, which simply means a decrease in the amount of light. As the days get shorter, it triggers the flowers to form and the bracts to change color. However, the leaves like as much sunlight during the day as they can get, which is why the larger versions are found commonly in Hawaii, Southern California, and Mexico. If nighttime temperatures dip below 50 degrees the plant usually won’t survive, but without ample daytime sun, it won’t survive either. This is why most Poinsettias bought for Christmas decorations don’t last through February.

Poinsettias have long been mistakenly believed to be deadly if ingested. This belief is traced back to an early 1900’s urban legend of a two-year-old girl who died next to a Poinsettia bush. Based only on hearsay, this allowed for the plant to be included in a 1944 book called “The Poisonous Plants of Hawaii”. In both the 1970s and 1980s, the FDA published information classifying them as deadly and banning them from nursing homes.

In subsequent scientific research, while contact with the plant has no effect, ingestion can cause nausea or diarrhea. Nationwide poison control centers report that calls related to poinsettia exposure resulted in “zero” fatalities. Additionally, if eaten by pets it may cause drooling or minor nausea, but rarely necessitates medical attention. At best, it is described as irritating, but not deadly.

Poinsettias and the Christmas Connection

In Mexico, there is a legend of a young girl, Pepita, who was so poor she had no gift to offer the baby Jesus during the Christmas Eve service. Inspired by an angel, she gathered flowers by the roadside. “It is not much,” she thought, “but if given in love will it not make the Lord happy?”

It is said that when she laid the small bouquet at the foot of the Nativity scene, they turned bright red, and those who saw it felt they had witnessed a Christmas miracle. From then on, the Poinsettia has come to be called, Flores de Noche Buena, or Flowers of the Holy Night.

In the United States, however, the story is a bit more commercial but none the less fascinating. It is the story of a fourth-generation family business that supplies the bulk of the world’s Poinsettias. In the US, approximately 70 million Poinsettia plants are sold in a 6-8 week period during the holidays. This is valued at some $250 million dollars.

The First Family of Poinsettias

In the year 1900, Albert Ecke of Germany emigrated to Los Angles and opened an Orchard. He was taken by the beauty of the Poinsettia and began to sell them on the street, always to great delight by consumers. His son Paul Ecke, developed a proprietary grafting method for the plant so that they looked like a small bouquet in a pot, making them even more attractive to buyers who wanted to decorate their Holiday tables. It was, however, the third generation of Eckes who cemented the Christmas association.

In addition to modernizing distribution, Paul Ecke Jr. began to send Poinsettias to TV stations for free to decorate their sets and get them in holiday photos in popular women’s magazines. This resulted in invitations to promote the plants on Bob Hope’s Christmas Special, The Tonight Show and before long, buying Poinsettias for the Holidays became an American tradition.

When Paul Ecke Jr. learned that many of the photoshoots for the Christmas editions of Women’s Magazines were shot in the late summer, he helped create a special variety of Poinsettia that he could cause to “turn red” in the summer for advertising purposes.

Until the early 1990s, the Ecke family had a virtual monopoly from their family farm in Encinitas, California supplying 90% of the worldwide demand for Holiday Poinsettias. This was due to the specialized grafting method developed by Paul Sr. However, this monopoly changed in the late 1980s when John Dole, a young graduate student, now turned professor from the University of North Carolina, figured out the grafting system previously known only to the Eckes. He published this work and soon, the Eckes had competitors near and far.

Over time, the Ecke family business, now run by Paul Ecke III, decided to move its operations out of the US to stay competitive. They still supply about 70% of the domestic market and 50% of the global market for Poinsettias but have pivoted to supplying growers with cuttings rather than selling in pots.

December 12th is National Poinsettia Day, marking the anniversary of the passing of Joel Robert Poinsett. There is, however, one more notable thing that Mr. Poinsett is credited with. Being a physician, botanist, and scientific scholar, Joel Poinsett became a founding member of the National Institution for the Promotion of Science, which many believe intended to secure the endowment of James Smithson who left his fortune to the United States to increase the “diffusion of knowledge.”

Poinsett was a proponent of the idea that the money should be used to establish a National Museum, and while in the end, Joel’s institution did not receive the money, the conversation surrounding how to use the money was forever altered, and in fact, a National Museum was established. The Smithsonian and the Poinsettia share a strange and unique connection through a South Carolinian Scholar who loved his flowers, loved scientific pursuit, and had a very good sense of the future.

What You May Not Know About Hawaii Statehood Day

Aloha All!Happy Summer! The tourists have returned to Hawaii in droves and we are seeing record numbers of visitors this summer.We are appreciative to see... 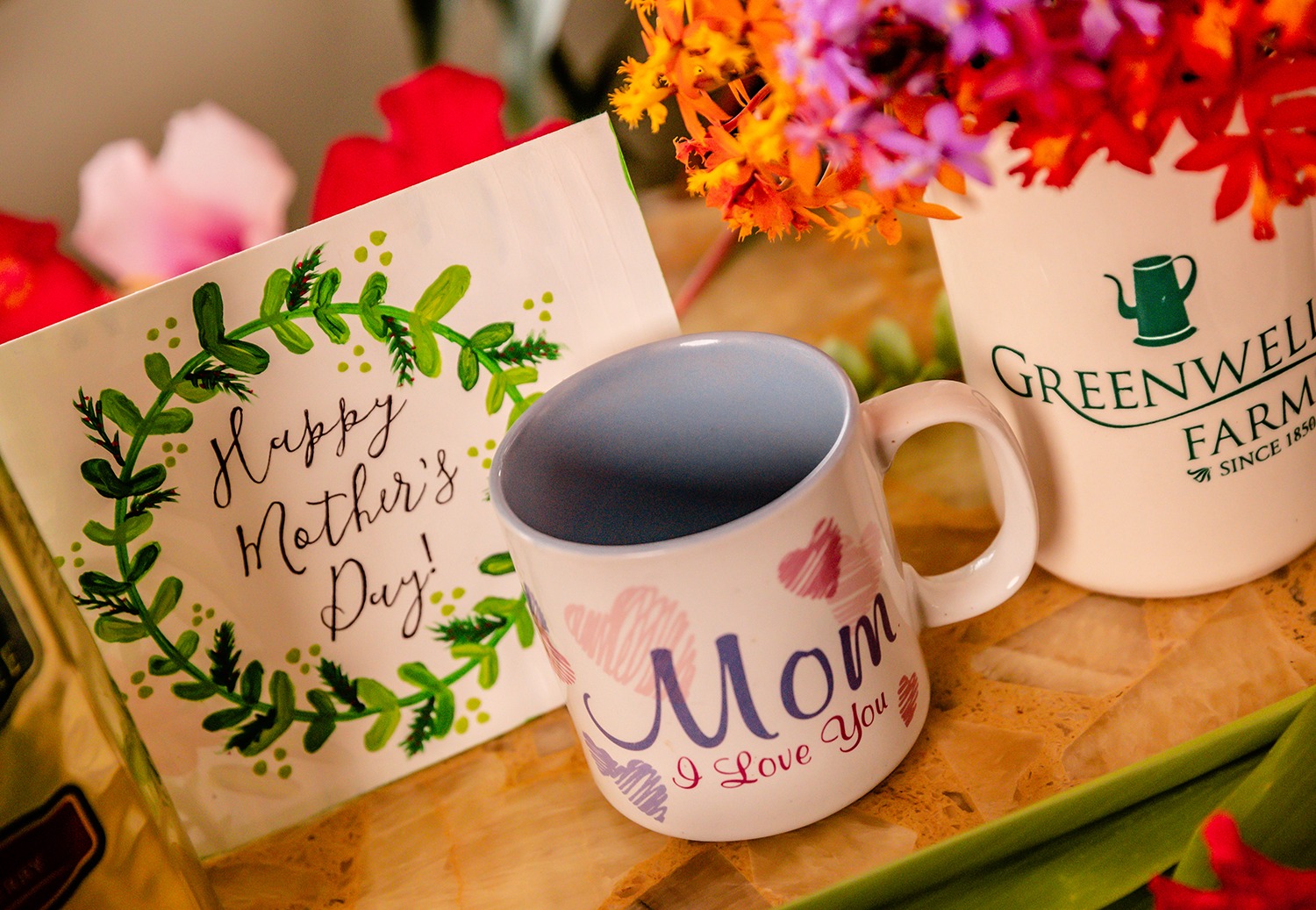 First…if you are a mom, Happy Mother’s Day! Moms are the best.All of those unseen and un-thanked moments when you rose up and did what... 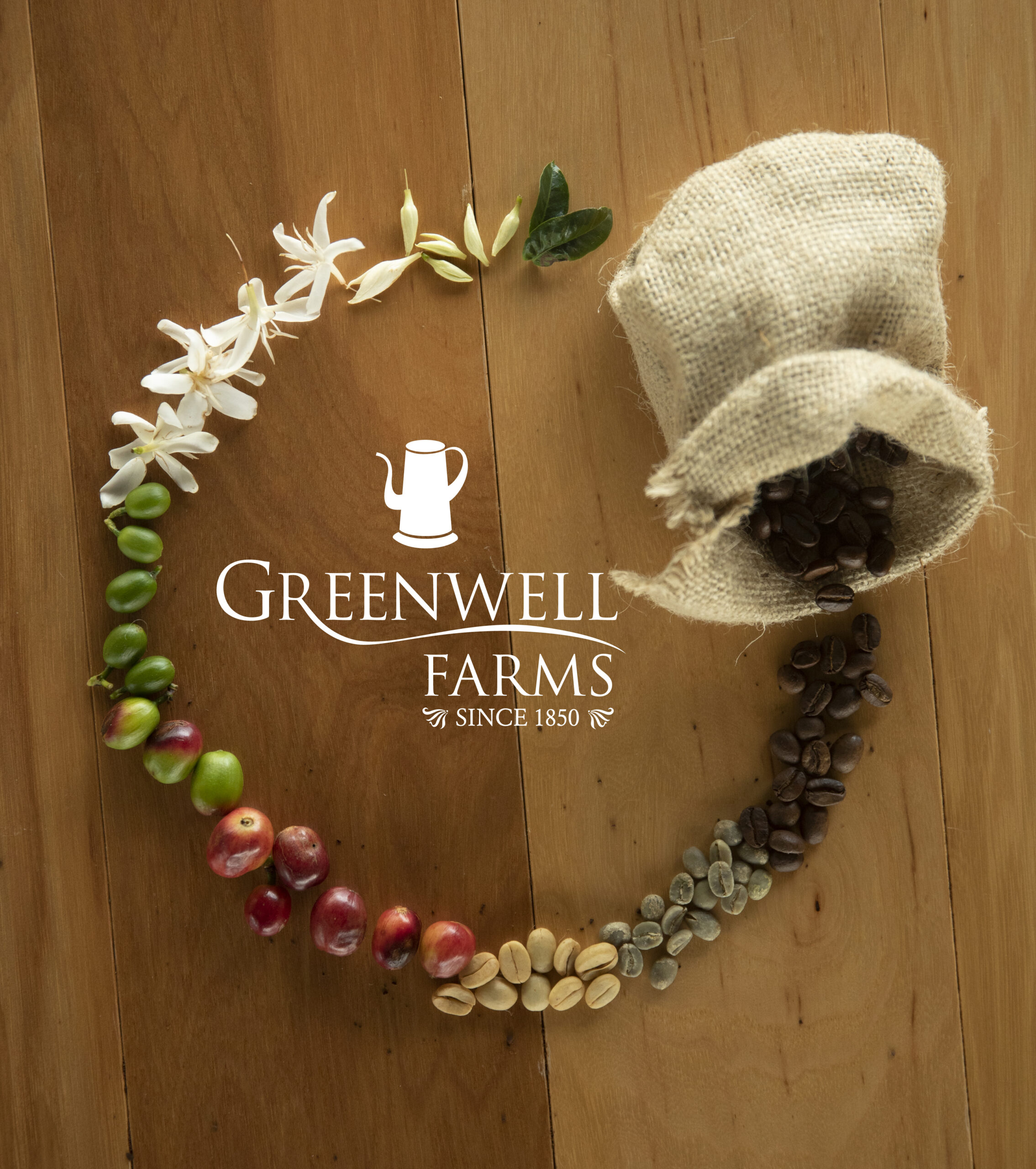 Thanksgiving As A Way Of Life

Giving Thanks Giving thanks for the people and things in our lives is a noble and uplifting practice. As the Thanksgiving Holiday arrives this year,...
Join Our Newsletter
Thank You!